When Heather and I first decided to move out obviously we were so excited and probably the only thing we could talk about was how we were going to decorate and how our apartment was going to be so “shabby chic” and blah blah blah. Well we signed our lease and had a month before we could move in so we started packing our things in our parents’ houses. We also started thinking about what we were going to need for our place. Both of us were only coming with a bed, a dresser, and maybe a couple nightstands. Great we would have furnished rooms, but what about the rest of the apartment? Our list of what we needed wasn’t big but it was all big things like a refrigerator, a couch, coffee table, kitchen table with chairs, a TV and TV stand, all of the stuff like that. We were trying to think of ways to get all of these things. It was getting close and we still had acquired none of it so our last resort plan, which was a joke but kind of not really, was a blow up couch, an ice chest for a fridge, and a fold out camping table for the kitchen table. Yes I know, we are so classy. But if it came down to it, we would have rocked these redneck ways. Champagne taste on a moon shine budget ya’ll!

Well good news for everyone, we did not have to do that! Before we moved Heather’s parents decided they wanted to get a new couch and that we could have their old one. They weren’t getting a new couch though until Memorial Day which was like three weeks after we moved in, no big deal. We could be couchless until then. Then they decided we could have it when we moved in! Heather your parents are angels. So couch was done. The next big thing was the fridge since it is kind of essential if we want to have food in our place. We were both in no position to really buy a new one. Heather posted on Facebook asking if anyone knew of a fridge for sale. Luckily one of our sorority sisters had recently moved out and she had a fridge that she needed to get rid of, and get this, she sold it to us for $50! Thank you so much sister, you are an angel too! We didn’t even measure it to make sure it would fit in our apartment. I just had my dad pick it up with me when we moved and we crossed our fingers it would be okay. It was, there is actually a lot of room on the side of it because it is a pretty small fridge. The door of the freezer actually fell off while we were moving it. We opened the trailer and my dad handed me the door and said “here carry this”. Awesome. But it works great! Besides the fact that the inside of the door doesn’t have a railing I guess you would say so we broke the mayo the other day opening the door too fast. The jar tried to escape and cracked a whole in the lid. It knows better for next time now.

Okay so now we had a couch and a fridge. We have been here for a month and a week now. It wasn’t until last week that we finally got a coffee table. Heather and I discussed making a cute one we saw on Pinterest but then finally went against it because we didn’t have time, it would end up costing more than we wanted, and if we made it there was a chance there would be no more blog since it required using a saw and we both wanted to keep our fingers (#wearenotcoordinated). We decided on a cheap $20 coffee table from Ikea. Last week I was going to pick it up but when I finally went to Ikea for something else I needed I didn’t have time to get the table so I told Heather I would get it next time. The next day Heather texted me and said, “Look what I found!” and sent me this picture: 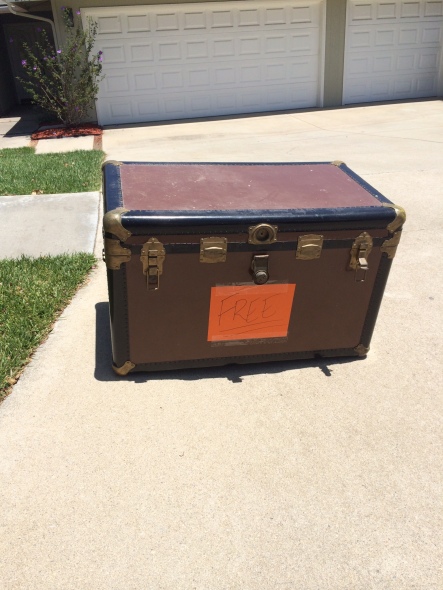 How cool is that? It is like a vintage trunk! I texted her back and said, “Do you think it is big enough to be a coffee table?” She responded with an, “Uh yeah I am pretty sure,” with this picture: 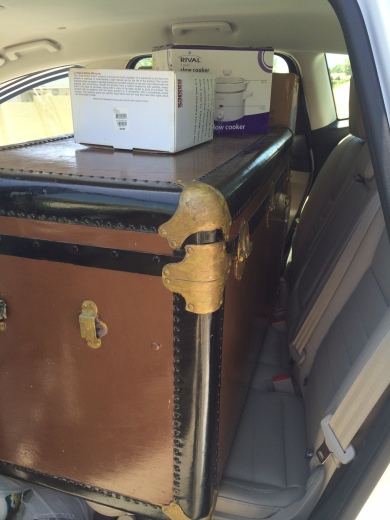 Yeah that is freaking big and takes up her entire seat. So she brings it to the apartment and it is in her car for a good three or four days because we didn’t have a time during the day together to get it out. Finally on Wednesday we did. We were so excited to have a coffee table! Heather unlocked her car and we opened the door and started to take it out. It was a little more difficult than we thought. We tried a couple more ways but still couldn’t get the sucker out. The trunk was being stubborn!

Or maybe it was just too big to even be in the car. Her brother put it in for her but wasn’t there to take it out. It was so difficult. We had to roll down her window so the corner could poke out, and had to have one of us lift up and out while the other one of us was inside the car pushing it. Success though and we did it! Now it is cleaned up with furniture polish and is sitting right in front of our couch. It is so “shabby chic”. Granted if you put your feet up on it they will probably go to sleep since the trunk is taller than the seats on the couch but that is besides the point. The point is now we only need a kitchen table and we will be fully furnished! It’s only been over a month but who is counting? At least we have a coffee table we can eat at now!

One thought on “Furniture is for Peasants”